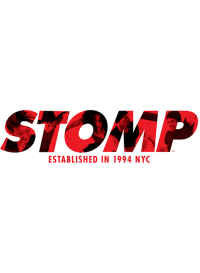 STOMP, the award winning international sensation, is a unique combination of percussion, movement and visual comedy. STOMP has created its own inimitable, contemporary form of rhythmic expression: both household and industrial objects find new life as musical instruments in the hands of an idiosyncratic band of body percussionists.

STOMP is now playing in New York, and on North American and European tours.

STOMP is created and directed by Luke Cresswell and Steve McNicholas.

In addition to the stage shows, STOMP has been an overwhelming success marked by rave reviews, numerous awards, an Academy Award nomination for the short film Brooms by STOMP co-creator/ directors Cresswell and McNicholas, four Emmy nominations and one Emmy Award for their acclaimed HBO special Stomp Out Loud, noteworthy TV appearances ranging from The Academy Awards (produced by Quincy Jones) to Mister Rogers' Neighborhood, and a series of award-winning international commercials. STOMP has become such an identifiable part of popular culture that it has been parodied on Saturday Night Live and The Simpsons, and has been an answer on Jeopardy