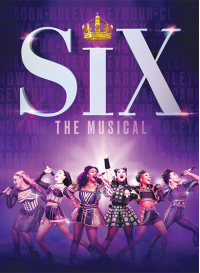 The cast, who created their roles in the North American premiere of SIX in Chicago in 2019, features Adrianna Hicks as Catherine of Aragon, Andrea Macasaet as Anne Boleyn, Abby Mueller as Jane Seymour, Brittney Mack as Anna of Cleves, Samantha Pauly as Katherine Howard, and Anna Uzele as Catherine Parr.

Divorced, beheaded, died, divorced, beheaded, survived. From Tudor Queens to Pop Princesses, SIX the wives of Henry VIII take the mic to reclaim their identities out of the shadow of their infamous spouse—remixing five hundred years of historical heartbreak into an exuberant celebration of 21st century girl power. The female cast, soon to be announced, are backed by an all-female band, the “Ladies in Waiting.” Songs from the studio album are streamed on average 300,000 per day making it the second highest streaming cast recording in the world.