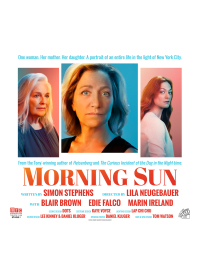 Blair Brown (Copenhagen, "Orange Is the New Black"), Edie Falco ("The Sopranos," Frankie and Johnny...), and Marin Ireland (Reasons to Be Pretty) form a powerhouse trio of stars in this deeply felt, gorgeously imagined new play by Tony winner Simon Stephens (Heisenberg, The Curious Incident of the Dog in the Night-Time). In Greenwich Village a generation or so ago, the city is alive. Joni Mitchell sings, friends and lovers come and go, and the regulars change at the White Horse Tavern. As 50 years pass, one woman's life is revealed in all its complexity, mystery and possibility in this enthralling world premiere about mothers and daughters, beginnings and endings in New York City. Directing is Lila Neugebauer (The Waverly Gallery).

Morning Sun was commissioned by MTC through the Bank of America New Play Program.