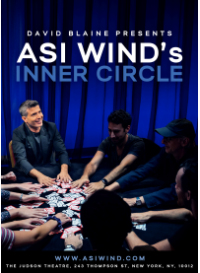 Blaine calls Wind his “favorite magician” and says that his act “is certain to have any crowd screaming, sometimes crying, and always inspired.”

Penn & Teller, whom Asi fooled on their TV show, “Penn & Teller: Fool Us,” said, “Asi is one of the best magicians we’ve ever seen.  We love him. He’s great. Go see him.” Watch Asi fool Penn & Teller here.

Asi has also stumped Jason Alexander who said, “I know a good deal about magic and how it is done. Asi Wind makes me think I know nothing. And that is glorious.”

Enter Asi Wind’s Inner Circle —the most personal magic show audiences have ever experienced. The moment they enter the theatre space, they become a part of the show. The unique setting intensifies the performance and creates a logic-defying experience that goes beyond magic. Audiences are not only witnesses to the magic; they become the magic itself. It is exhilarating, mysterious and hilarious. Now is the chance to join Asi Wind’s unforgettable Inner Circle.

“The kind of magic I create needs to be experienced up close; that is why we are creating the most intimate theatrical space in New York,” says Wind.

The show’s creative team is Adam Blumenthal (lighting designer) and Arcana (design build). Jonathan Zencheck is Production Manager. Along with David Blaine, the show is produced by Arny Granat, Michael Cohl, and Winston C. Simone. KGM is the General Manager. Marketing and Promotions is Leanne Schanzer Promotions (LSP) and Advertising is Situation Interactive.